The Karst is the name given to the landscape above the Bay of Trieste up to the Alps. The name karst (in slovenian language kras) is also used to describe phenomena which are typical of such uniquely rocky and hollow land. The karst topography is thus a stony, barren, parched region overgrown with modest bushes and poor meadows, where the sun burns in the summer, and in winter, the famous karst “burja” or north wind blows. The water in the karst is underground, losing itself in the cracks in the limestone.

But under the surface, water has created a pictueresque subterranean world of thousands of caves, halls, abysses, pillars and disappearing rivers. The water and limestone have created glittering crystals which have grown into stalagmites and stalagtites. World famous is the Cave of Postojna, among the largest cave systems in the world (only the Mammoth Caves in the USA are bigger). 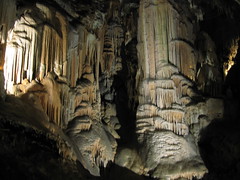 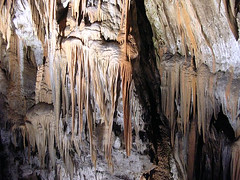 The cave has 27 kilometres of accesible passages. The cave is open to visitors all year round and during the main season the cave train makes 17 trips every day.