The exceptional natural beauty and rich cultural heritage of Triglav National Park make it a very special tourist attraction of Slovenia. The most important natural sights of the Julian Alps are protected within its boundaries. The park lies near the triple borders of Austria, Italy and Slovinia and is the largest national park in Slovinia. This is one of the last oases of peace, isolation, wildness and unspoiled nature in Europe and is a true Eldorado for hikers, mountain walkers, alpinists, pot hollers and canoeists, for cross country skiers, botanists and ethnologists, for photographers and painters. 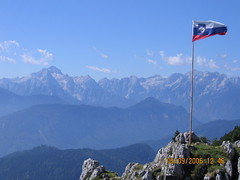 The central core of the park is composed of high mountain massifs with the high peaks and glacial valleys of the Julian Alps and the forest plateau of Pokljuka and Mezaklja. The rivers Soca and Sava rise in the park, and Triglav Lakes, like a beautiful string of pearls, lie high in the mountains. In addition to Bohinj Lake, mention should also be made the waterfalls of Savica in Bohinj, Pericnik in Vrata, Sum in Vintgar, as well as the water-falls in Martuljk, and Skocniki and Nadisa in Tamar. Some waters have furrowed out deep and picturesque ravines, those on the Soca and Koritnica, Vintgar gorge near Bled, the gorges of Tolminka and Mostnica in Bohinj.

The main tourist centers in Triglav National Park and its immediate environs are Bled, Bohinj, Bovec and Kranjska Gora.

Bled is a world famous tourist center with such natural phenomena as the lake with its island, Vintgar gorge etc. and cultural monuments which include Bled castle (today a museum and restaurant) and the church on the island.

Bohinj, with the largest lake in Slovinia, includes Bohinj Lake and numerous villages in the upper and lower valleys with marvelous waterfalls, gorges, high-mountain lakes etc. Two medieval churches, the Church of Saint John and the Church of the Holy Spirit are situated by the lake. In addition to both summer and winter tourism, the many centuries old cheese-making tradition is also well known.

Bovec lies in the centre of the Bovec basin, at the beginning of the Upper Soca Valley. The River Soca, with its picturesque ravines is one of the most beautiful mountain rivers in Europe. There are a number of monuments of the First World War in the vicinity.

Kranjska Gora is a favourite summer and winter tourist center near the border crossings with Austria (Korensko sedlo) and Italy (Ratece). Nearby is the world famous ski jumping centre of Planica. Kranjska Gora is the starting point for many excursions and hikes in Triglav National Park and its surroundings.