Skocjan Caves in Slovenia (Slovene: Škocjanske jame; Italian: Grotte di San Canziano; German: Höhlen von St. Kanzian) is a structure of limestone caves in the Kras (Karst) area in southwestern Slovenia, comprising broke down dolines, nearly five kilometres of underground passages, caves more than 200 metres deep and many waterfalls. Skocjan Caves in Slovenia are one of the well-known places in the world for the study of karstic (limestone) phenomena. 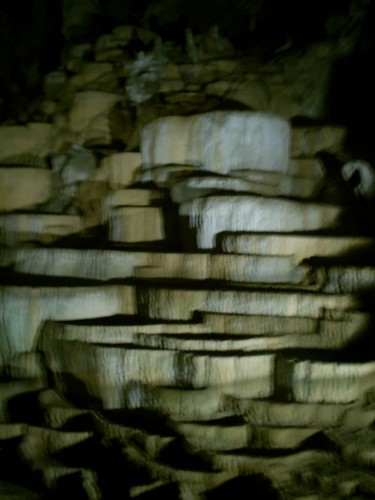 The Slovenia Skocjan Caves Regional Park lies in the south-west of Slovenia, on the main Karst plateau, from which the word Karst originates. The park comprehends 413 hectares and is 15 km from Italy (Fernetici by Trieste), 80 km from Ljubljana and 12 km from the Lipica Stud. The Slovenia Skocjan Caves, with the grandness of their belowground halls and gorges, have a particular position among the many thousand caves in Slovenia. The Slovenia Skocjan Caves comprise a network of eleven caves, with hollows, swallow holes, natural bridges among them and many geological features. Because of their extraordinary natural features and cultural heritage they have been on the UNESCO world heritage list since 1986, and in 1999 were put on the Ramsar List of Wetlands of International Importance as the world’s largest underground wetlands. You will wonder at the beauty of both the belowground world and the encompassing karst world above. The temperature in the cave is constant 12°C. 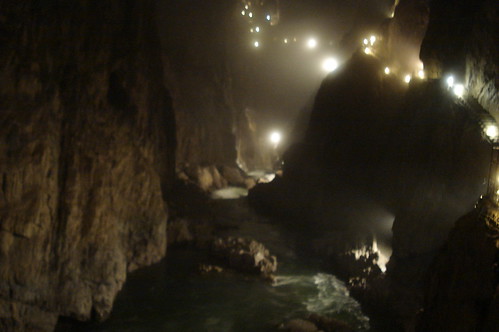 The Reka River goes away underground at Velika Dolina into the Škocjan Cave (Škocjanske jame) and then flows underground for 34 km towards the Adriatic Sea coming up near Monfalcone, Italy where it changes state into the source of the Timavo River. The view of the big river, in the rainy season as it vanishes underground, on the bottom of Velika Dolina, 160 m under the surface, is both awesome and frightening. The locality of the Skocjan Caves Park is archeologically exceedingly rich, indications are that it was populated since more than ten thousand years ago. A worthy treasure of archeological findings in ‘Musja Jama’ suggest the influence of Greek civilization, where a cave temple was set after the end of the Bronze Age and in the Iron Age. This region was certainly one of the most central pilgrimage sites in Europe, three thousand years ago, especially in the Mediterranean world where it was part of important cult importance in connection with the afterlife and contact with the spirits of the ancestors.

What the Slovenia Skocjan Caves offers you

In addition to tours of the Škocjan Caves, which are accessible to guests year-around, the park offers visitors various other possibilities for learning about the Kras region and its features.

• Škocjan Museum expositions. A tour of the settlement itself includes an ethnography exhibition in the J’Kopin Barn, an illustrated history of the investigation of the Škocjan Caves in the Jurjevo Barn, and biology, geology, and archeology exhibitions in the Natural Science Center.
• Travel to the caves in winter, early spring, and late fall when tour groups are small than during the summer high season.
• Škocjan Education Trail, a moderately demanding hour and a half walk around the Velika dolina and Mala dolina collapse dolines in the core of the park. Informative signs present the basic features of karst phenomena and numerous interesting descriptions of karst plants and animals along with the rich cultural and historical heritage of the area.

Guided tours of the Education Trail for visiting groups can be organized in advance during the school year. 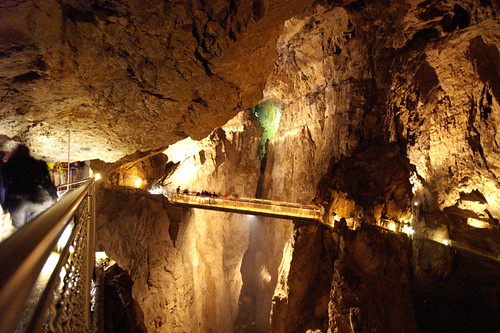 On the Ilirska Bistrica-Divača route there is a marked turnoff for Škocjan Caves Park in Famlje. Rising numbers of guests are coming up to the park via train and by walk. The train arrives in Divača, from where a marked track leads through Dolnje Ležeče to the Škocjan Park Information Center. The walk takes about 45 minutes.

Visitors are taken on a tour of the Skocjan Caves by fully-qualified guides. The tour takes an hour and a half and explanation is made in English language.

On the surface ancient barns housing ethnological, karstology, and archeological exhibitions await your visit. You can also walk through the park, wonder at its natural and cultural views, and delight in its unspoiled nature on the Škocjan Education Trail.

Tourist agencies can get a 10% discount. Guides of bigger groups (over 21 person ) have a free entrance.