The Capital City Ljubljana | The old mingles with the new

Despite modernization Ljubljana has managed to preserve the old city core with Renaissance, Baroque and Secession facades, ornamental portals, meandering roofs and romantic bridges over Ljubljanica river. Over the centuries, Ljubljana’s development was strongly influenced by its geographical position. The old town buildings from Castle Hill down to the Three Bridges make a characteristic sight of this town. For a vacation there are many accomodation possibilities in hotels, hostels or apartments for rent.

The airport is just out of the city with many cheap or budget flights to the major European cities. Other ways to travel to Ljubljana are with train, especially the train from Trieste, the once well know Orient Express. Slovenia is connected to Europe by a number of international railway lines. Car-trains may be of particular interest to tourists wishing to travel with their own car. New highways connect all parts of Slovenia with Croatia in the south, Italy in the west and Austria in the north part. 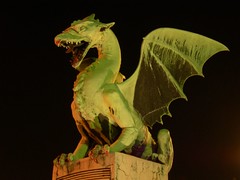 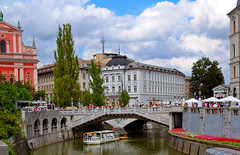 Tourism has a predominance on the Ljubljana map. Great emphasis is placed on culture and history. Opera companies and symphony orchestras, several playhouses and a puppet theater characterise the cultural atmosphere of this city. Concerts and many other cultural events are scheduled in the performing art center Cankarjev dom (Cankar House), named after the novelist Ivan Cankar. The concert hall is known as one of the best acoustic halls in the world.

The city of Ljubljana offers regular sightseeing tours on any day of the year, which include all the city’s most significant sights and are mainly intended for individuals and small groups.

Ljubljana on request: Tours on request are throughout the year available in many different languages. Groups and individual guests can choose from a diverse range of sightseeing tours available: the boat tour along the Ljubljanica river, the hot air balloon flight over Ljubljana, the cycling tour of Ljubljana, the tourist train ride, the boat and walking tours of Ljubljana by night and a number of special interest tours covering, respectively, Baroque Ljubljana, Art Nouveau Ljubljana, the masterpieces by the national architect Plecnik, the churches of Ljubljana, and the parts of the city related to the life of the greatest Slovenian poet, France Preseren.